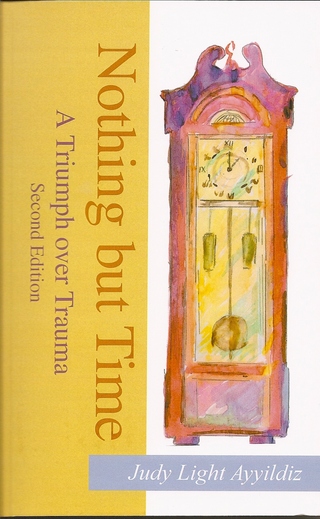 KIRK DIKEN (FORTY THORNS)
This novel is a history of Turkey from 1900 to the present, from the sultanate to the republic, of wars, revolutions and the changes within a nation, of a family and of a woman, a saga, a love story between a man and woman and a woman with her country.

Nothing but Time
Spiritual strength from moving, insightful, yet humorous stories of the people and experiences in Judy's life.

Some of My Ancestors Are Ottomans and Turks
An American grandson of a Turkish immigrant learns about his Turkish and Ottoman heritage.

Courage is the highest virtue. Without it, none of the other virtues succeed.

"This book grabs you from the first page. With most of the writing coming from her personal journeys during this trying time, she gives readers an inside look at her fear, pain, and courage. This is an incredible story that I think could inspire anyone who deals with a debilitating illness."

"When Judy Light Ayyildiz, a poet and author of several books on writing, found herself paralyzed by Guillain-Barre syndrome, she was told that nothing but time and physical therapy could help her. Armed with an imagination unbounded by time or physical constraints, Ayyildiz finds solace in her rich and varied memories--of growing up in West Virginia, of her courtship and marriage to a Turkish physician, of the people who have touched and inspired her. With her gift for language and an unerring eye for detail, she chronicles the various stages of her healing in a way that is sometimes heartrending, often insightful, and sometimes even funny."

Overnight, everything in her life alters when Judy awakens paralyzed from the waist down by a mysterious illness. As she struggles for the courage to find a way of escape from this well of isolation, pain, and powerlessness, her creative imagination takes flight. Insight gleaned from events and people in her past and present both in Turkey and the U.S. is told in stories of restrained humor and Appalachian flavor. Judy discovers that her spiritual desire to "walk" is stronger than the fear of "falling."

I am still awake. Half of me can't move. Trapped in this bed, I stare up at spider-web cracks in the plaster, splintered lines like strings of nerves.

An eerie violence creeps through my body. Like a guerrilla army. It has ambushed, captured my nerve-system.

The doctors mention blood plasma transplant. Then say they're not sure it helps. Would my blood be removed, altered, and put back? They speak in their calm, professional voice so I'll feel safe.

Like when Dr. Miller brought up respiratory failure. Heart and lungs have nerves too. He's ready to put me on a respirator. What if I get to the place where I can't breathe? Is this paralysis permanent? If it gets worse, will I be able to talk? Could I go into a coma? Die?

Thirty-nine hours ago I walked up the hill to my house. Fourth of July fireworks shattered against the night sky. Less than a day later I'm hooked to machines. The one time it would be handy to have a husband who is a doctor, he's in Turkey.

The guy in the bed on the right side of me is almost gone. I hear them whisper as they work on his body:

"Had a stroke two weeks ago. No change yet."

Whispering, as if he could hear. He and the woman on the other side of me don't ever wake. I don't sleep. I can't raise up. My brain is juiced up. Like these florescent lights that stay on all the time. My mind jumps from one image to the next like some high-energy drug propels my thoughts, though they haven't even given me an aspirin.

A gray-haired nurse has worked evening into night on the old man. Up-dating, mixing, injecting measured units of hope. When he inhales, it's a wobbling tone, a bass violin being tuned. His exhales whap. String breaks. He drones on and on.

The woman's jaw flutters when she breathes. Gives me The Willies. From the desk I heard,

I eavesdrop on their pity. They can't operate. Her feathery rasp could be a bat flapping out of a cave. Must always be night wherever she is. If she's having an out-of-the-body experience, she knows I'm spying.

I must stay conscious. This paralysis moved in on me last night while I slept. My legs seem attached to my torso like dead-weight, rolls of sausage. My toes tent the sheets like a pyramid.

Yesterday, my thirteen year-old Karen stood in the driveway when the attendant wheeled me to the ambulance. Her eyes, wide as a spooked cat. She looked like an abandoned waif the way her jaw was clinched and one arm was holding the other. I was leaning back off the litter as they carted me away telling her not to worry I'd be fine.

I hear the rustling of Linda's starched uniform before I see her. Black curls trickle from her cap. Cherry lipstick shines. Lips pucker like some Forties' movie star. She hums, "Amazing Grace."

Linda sees me staring and stops mid-song, casually pulling her hands behind her back. I note the yellow blotch on her lapel that was not there thirty minutes ago and guess she had a sandwich with mustard. She smiles, studies the monitor, then looks down at me. "Hi," she says.

I take a deep breath. They know who I am. I scrunch my lips like hers then answer, "Judy."

"Where are you?" She is shaking a finger.

I cross my arms, carefully. The pull of the IV throbs. She is waiting.

I am judging her restraint. The same round of questioning, every half hour since five o'clock last evening.

"We have to chart your physical and mental responses," she repeats.

I give up. "I'm in the NICU, University Medical Center, Charlottesville, Virginia."

I like Linda. We've talked. We're both from West Virginia. She adjusts my pillow. "Do you know what day it is now?"

I lift my hands to let her smooth out the top of my sheet.

"Sunday. Yesterday was Saturday, tomorrow is Monday. This drill is irritating." She looks at me like I'm a spoiled second grader. I'm being naughty.

"You guys sure provide a hell of a night out on the town," I add.

Linda steps back, folds her arms, and trains that schoolmarm eye on me.

Now, I'm really in a pit. The NICU. The nurse said that most patients in here rarely care how long the night gets, said my talking is a novelty.

I strain to listen past the doorway. The hallways out there are a tunneled maze. Ever so often, I hear laughter. It seems to flare up like a whirlwind. The maze must be full of cackles and croons and clangs. Stainless steel falling against the tile would toll like a bell. All over this hospital there must be machines gasping and sputtering. Sudden legs racing to keep up with the clock. Blithe spirits in white cotton soft-sole shuffling back and forth on their trained feet. And people standing up and walking off without having to think of telling their legs to move, their legs carrying their bodies like magic.